Since we started operating mini coaches in the 1980’s, we have grown to become Cumbria’s largest independent bus and coach operator. Our expertise, experience and quality of coaches is unrivalled throughout the country.

Reays are an award-winning family business that combines 21st century technology with a good old-fashioned personal touch. Renowned for providing the very best in luxury coach travel, while offering the latest in safety and comfort, we have a reputation for quality and reliability - always at competitive prices and that’s how it has always been. 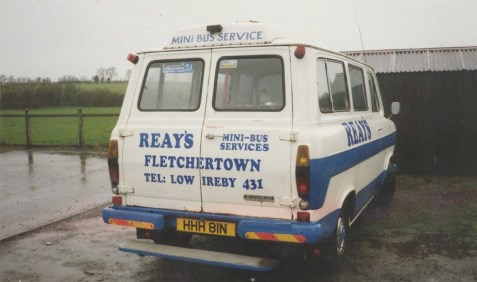 1990 - Chris joined the business on a full time basis, leaving the family building business, establishing an operating centre in Fletchertown. Under Chris’ leadership, the company has expanded into a hugely successful business, while still maintaining its family roots and ethos.

1990 - The business moved from Fletchertown to larger premises at Miller Park in Wigton.

2004 - Having outgrown the Miller Park premises, land on the outskirts of Wigton was purchased to build a purpose-built headquarters.

Now in 2019 Chris continues to lead the way as Managing Director and it’s his drive and energy what continues to push the business forward.  He is no stranger to the front line as he insists on finding time to stay in touch with staff and customers and he can regularly be found behind the wheel of one of the company’s coaches as a driver, often to the surprise of passengers! When asked what keeps him motivated, he simply replies “I love the industry, I’m a complete bus nerd and it’s a delight to continue my father’s legacy. When I look around and see customers laughing and enjoying their time with us be it on a holiday or a school run, I can’t believe how far we’ve come”.

Chris’ wife Nicola is the company’s Finance Director and sits opposite him in the headquarters at Wigton every day of the week. Despite all the success and expansion of the business over the last two decades, Chris and Nicola continue to work brilliantly together to drive the company forward in new and innovative ways. As well as being husband and wife, they are also a great partnership in business, with Chris’ ideas and vision complementing Nicola’s financial realism.

Now with a fleet of more than 100 vehicles and a workforce of 150 employees, the business continues to grow from strength to strength.

But don’t take our word for it... Major international tour operators like Kuoni and Interski choose Reays to take their international tourists all over the UK. Plus, Premier League outfit Burnley Football Club are among the many professional and amateur sports clubs whose players travel with Reays because they know they’re on to a winner with us.